Marco Polo to be Broadcast in January

I finally have a date for broadcast of the Marco Polo films! Tune in to Arte at 7.55pm for five consecutive nights from Monday to Friday Jan 3-7.

The idea of the programe is to try to retrace the route of Marco Polo's 13th-century trip from Venice to Xanadu (Beijing), following as closely as possible Polo's original route while reinterpreting the spirit of his book by seeking out the kinds of things Polo was most interested in.

The film sees me mining for oltu tash stone in Turkey, tracking down an underground rock band in Tehran, on patrol with ISAF troops in Afghanistan, visitng the lapis mines of Badakhshan, flying over the desert oasis of Dunhuang in a microlite and fishing with cormorants in eastern China, all the time hitchhiking on trucks, buses and trains across Asia. 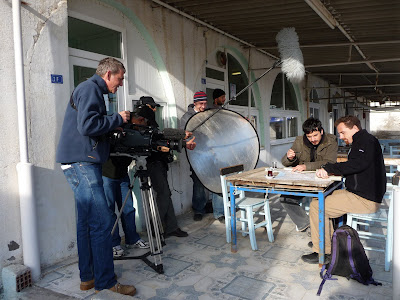 The Arte broadcast is in French, with further broadcasts on German channel SWR and then other German public television channels throughout summer 2010.

October and much of November saw me in India, specifically Darjeeling and Sikkim, for next year's LP India guide. The real challenge on the India guide is not the research (as insane as that can be) but the word count, specifically trying to cram 70 pages of information into 30 pages of text.

After a spring visit to western Bhutan it was interesting to see Sikkim for the first time, itself a independent Buddhist kingdom until 1975. In many ways it was the absorption of Sikkim into India and the role of Nepalese immigrants in the fall of Sikkimese kings that have shaped Bhutan's current political path as it strives to keep its own identity, while dominated economically and culturally by India and China. 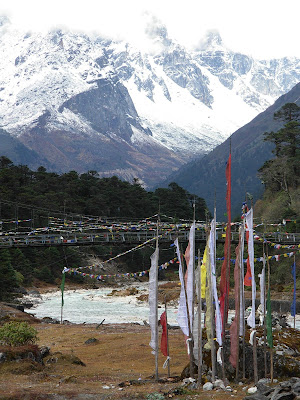 I have to admit I was a bit disappointed by Sikkim. Like China, the huge rise in domestic tourism has changed the nature of travel in India's wilder areas, with lines of tourist jeeps packed with noisy Bengali tourists taking the edge of the majestic scenery. It's actually quite hard to get near to the big mountains in Sikkim since much of the mountainous areas are off-limits to foreigners.

North Sikkim was pretty spectacular, particularly the Yumthang Valley. Also of note were the huge new Buddhist statues currently under construction in the south, huge 130ft tall images of Buddha and Chenresig, that will rival the new giant Buddha statue in Thimphu. 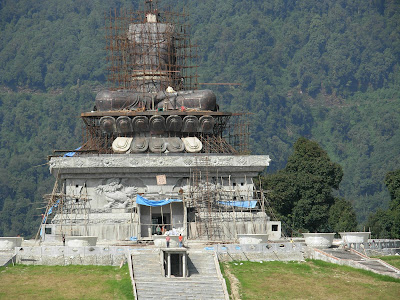 (Buddha under construction at Ravangla, Sikkim)

On the way back, on a day to kill in Delhi, I popped into the National Museum to see what I could of the huge cache of Central Asian antiquities brought here by Aurel Stein in his three expeditions between 1900 and 1916. Only one of the three Central Asian halls was open but the silk paintings from Dunhuang were fabulous, especially as I'd been there last year shooting for the Marco Polo film. Central Asian nuts will want to see the wall paintings and leather armour from Miran, Sassanian-designed silk paintings from Astana, monkey scultures from Yotkan, combs and examples of Kharoshti script from Niya and carved stucco from Karakhoto. 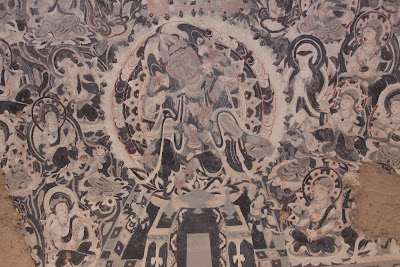 (Mural from Dunhuang)
Posted by Bradley Mayhew at 2:59 PM 1 comment:

Click on the images above to see in larger scale.

The big trip this summer was out to Western Tibet, out to Ali along the northern route and then to Mt Kailash down the southern route back to Lhasa, for a total of 5000km. I've done the route before and and it's perhaps the most beautiful drive in Tibet, if not Asia. Managed to visit a couple of new places for me - Gurugyam Bon monastery and the ruins of the ancient troglodyte city of Shangshung in the Khunglung (Garuda) valley. That was very cool and surprisingly easy to get to.

Big thanks to Andre and Alyson for a great trip.
Posted by Bradley Mayhew at 11:48 AM No comments:

Sorry for the silence. Got back a couple of weeks back from a big Himalayan research trip to Bhutan (4 weeks) and Tibet (six weeks) via Kathmandu, Hangzhou and Khotan. A crazy threee-month itinerary of 24 flights! I'm now home working like a madman on Tibet and Bhutan guides for Lonely Planet but as soon as I get a minute I'll throw up some postings on the Druk Path trek in Bhutan, the overland trip to Western Tibet and trek around Mt Kailash, the trip out to the ruins of the Shang Shung kingdom in the Garuda Valley and even some Marco Polo filming in Hangzhou and Kashgar. Phew, it's been a busy summer. Oh, and I moved house.

Sorry, my wife actually moved our house.
Can't really claim credit for that one.

But I did all the rest, I promise.
Posted by Bradley Mayhew at 11:56 AM No comments:

Just back from a trip to Denver for a New Year's Slim Cessna concert but still managed to find some connections to the Central Asian world. The Denver Museum of Nature and Science was hosting a high profile exhibition on Genghis Khan, with Genghis' portrait plastered all over town. I've been told the exhibition is light on actual artefacts (which is understandable for a nomadic empire) but I can't say for sure because the exhibition was sold out. Who thought the Mongols were so popular... Moral of the story: book your tickets online. If you're headed to Denver the exhibition is on until February 7th 2010. If you can't make it, I recommend the companion book, which is discounted at Amazon.

On the way back home we pulled into Boulder to track down the Tajik teahouse there. Apparently the chaikhana was built 20 years ago by Tajik craftsmen as a gift to Dushanbe's sister city Boulder. It's a perfect replica with lovely carved pillars, alabaster plaques and swirling painted arabesques. They even serve plov and shashlyk if you're feeling mutton withdrawal symptoms, though the prices will shock you if you've ever chowed down a dollar plov in Dushanbe. 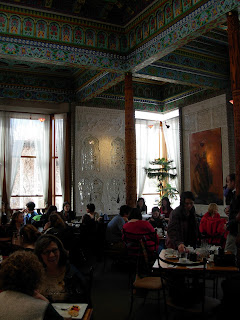 Posted by Bradley Mayhew at 3:42 PM No comments: