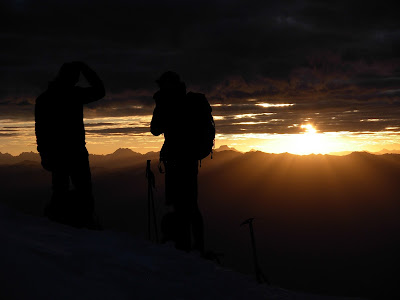 I’m an incorrigible high-altitude junkie. I’m never satisfied with simply crossing a mountain pass, I always need to find a nearby peak to scramble up for a little extra boost. My lungs only really start functioning properly above 4500m and my entire lower body seems best designed to walk at a 45-degree angle. The problem is that I have no technical climbing skills, so I’m limited to scrambles that require neither rope and harness.

I’ve always wanted to take that first step from trekking to climbing, so after a couple of weeks trekking in Ladakh in July I signed up for a climb of Stok Kangri, Ladakh’s most popular trekking peak. The peak is clearly visible from Leh, which makes it both accessible and madly alluring. The first two or three days take you up the valley behind the village of Stok, with an overnight at Mankarmo at 4480m and base camp at 4980m. You can climb the ridge west of the Mankarmo camp to help with acclimatisation, but the best way to adjust to the altitude is to walk the week-long Markha Valley teahouse trek beforehand, since that takes you over a 5000m-plus pass en route.

The climb itself starts around 1am. The mistake I made was wearing all of my warm clothes. It was freezing getting dressed at that altitude but after ten minutes of uphill hiking I was generating some serious body heat and was soon drenched in sweat under my down jacket (a bad situation as this can lead to hypothermia when the real cold sets in). As you follow the snaking line of head torches, your sensations quickly adjust to climbing in the dark, as total silence encases you like cotton wool. The only sounds are the crunch and squeak of snow under your boots and the labour of lungs heaving at 5500m.


After an hour you gingerly cross a glacier, then start to ascend on a mixture of rock and snow. In general there are enough rocks to not need crampons at this point. The skill is knowing exactly when to strap on your spikes. Put them on too early and you’ll be scraping around on stone. Put them on too late and there will be moments when you will feel distinctly nervous on a 45-degree snow slope without points to steady you.

The trail veers to the left and then traverses the ridge line. There’s nothing too scary, though there are a couple of fairly narrow sections that drop off to the left. Your fitness and more importantly your acclimatisation will decide whether or not you make the summit, but honestly it’s not a difficult climb. If you’ve timed things right you will reach the summit just as dawn's rays beam out from the horizon's orange glow. Below you to the north is Leh and the main Himalaya range, with the Nubra Valley, Karakorum range and Tibet beyond. To the south, just below you, is the Markha Valley, with the jagged Zanskar range beyond.

Back at base camp it's a one and a half day walk back to Stok, where you can visit the atmospheric fort and monastery before heading back to Leh, less than an hour away.

If you've always wanted to make that first transition from hiking to climbing, Stok Kangri is the perfect choice. It feels like a real summit, and a real achievement. You are on the way to being a climber.

Several companies in Leh offer guided climbs. I liked Ladakh Mitra, as they are local guys from Stok and they run the base camps that lead up to the mountain.
Posted by Bradley Mayhew at 9:30 AM 2 comments: